Meet Ben. Ben bought an over-the-showerhead shower caddy last week, and like most new shower caddy owners, he immediately filled up the caddy’s shelves with his bath essentials. Ben was happy with his new shower caddy until one eventful day where something very stressful happened.

One day, when Ben was taking a shower, his shower caddy slid from his showerhead and landed on his foot. Ben yelled in pain, but what’s more painful is the mess that the fallen shower caddy did; shampoo spilled from their bottles, the soap bar was in the opposite corner of the shower enclosure, and his razor was crushed by the weight of the caddy. Ben needs to clean up the mess fast, and he needs to do it while finishing his shower because he’s now late for work. 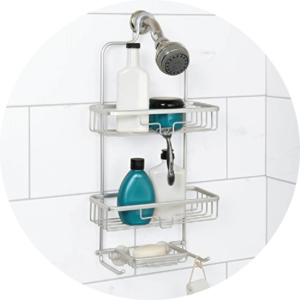 For those of you who have shower caddies which lack a feature to stop it from falling from the showerhead, don’t fret because there are three hacks you can do to solve that specific problem.

Remember to don’t cut the excess portion of the zip tie once it’s tied up on your showerhead. It may look ugly, but the excess part will serve as a failsafe to help your shower caddy stay in place.

Rubber bands or elastic bands will provide enough friction to help prevent your shower caddy from falling. But it’s still a workaround solution compared to shower caddies that have the mechanism to stop it from falling, sliding, or slipping. The lesson? Purchase quality shower caddies with such features that you won’t regret in the long run.