Below are curated pins from the social networking site called Pinterest on surprising shower caddy hacks that you can do. Like all hacks, some are easy while some are complicated to do, but regardless whether the shower caddy hack is easy or hard, the bottom line is still the same – to make shower caddies more useful to the user and to find other witty ways to use shower caddies in your bathroom.

An idea suggested by The Family Handyman is to use PVC pipes and zip ties as a razor holder and even a toothbrush holder. It’s a handy shower caddy hack if your shower caddy doesn’t have dedicated razor holders. But if you have one, it’s not pretty useful unless you possess multiple razors and toothbrushes and your current shower caddy can’t hold them all. 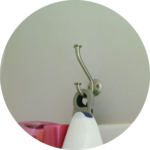 The next shower caddy hack was a brainchild of Kim. Ever bought an over-the-showerhead shower caddy just to realize that it won’t fit your caddy because your shower arm is too short or twisted in some weird way?

HGTV Gardens formulated this awesome shower caddy hack of placing a live orchid in a bathroom using a shower caddy as a placeholder. Imagine having a row of these things in your bathroom while taking a good dip in your bathtub, wouldn’t that be just splendid? Top that with relaxing lounge music and a glass of good wine, you’ll sure to be pampered when you’re done. 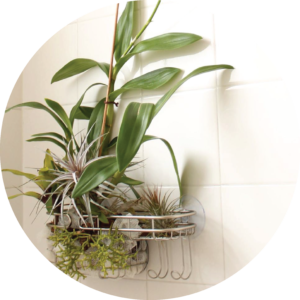 Take note though that your bathroom, depending on how much light your bathroom gets, may not be a suitable place to grow an orchid. What you can do is to find low maintenance plants that doesn’t require much sunlight like bonsais and other air plants.

Multiple Shower Caddies for the Clan 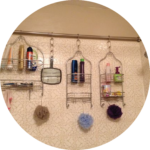 Pinterest user Vero Rivera came up with a nice shower caddy hack – to have multiple shower caddies for family members. I’m not trying to be sexist or anything, but additional two of three shower caddies are very much handy especially when you have two or more girls in the family because we all know how much they get finicky with their bathroom essentials. Additionally, a shower caddy for each member keeps each member’s bathroom materials organized and lessens the risk of exchanging private bath essentials like soaps, razors, and toothbrushes.

Multiple shower caddies for every family member is nice if you have a big bathroom because forcing too many shower caddies is a cramped bathroom is counterproductive and may end up cluttering your bathroom instead of organizing it. 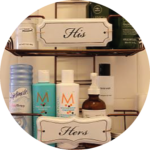 Though it’s not the same in the picture, you can buy this “his” and “hers” signage from Amazon. I think this idea is perfect for newlywed couples just starting out life together. You can also opt to choose other labels – like professional labels (doctors, engineers, lawyers, etc.) for example – to mark the shower caddy basket where your bathroom essentials are placed. 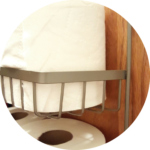 This shower caddy hack will solve your tissue roll problems using a shower caddy. Lou Lou Girls had this idea of using a shower caddy pinned on a bathroom cabinet’s door as a tissue holder. The website described it as a way to consolidate space where it’s out of the way and won’t get wet. Moreover, you can also use this idea to store other bath essentials like shampoos, conditioners, and soap bars for use in the future. Truly, a shower caddy is an effective tool to keep your bathroom essentials organized whether in plain sight or hidden.

I’m sure that there are a lot of more shower caddy hacks you and what I’ve mentioned above are just six of them. Out of the six, my favorite is perhaps the one where you use shower caddies as a mini bathroom garden holder. Having plants inside the bathroom brings that green soothing feeling that is perfect for winding down with a bath after a long and tiring day.