When it’s that time of the year where students are preparing to go back to school, there are a lot of things that most of us will overlook. Perhaps it may be forgetting to purchase new school supplies or forgetting to finalize the papers for your dormitory. But most of the time, especially the college freshmen whose going to experience living in a dormitory for the first time, we forget to buy college dorm shower caddies. 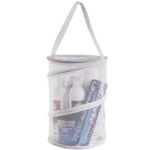 The company that retails the Dorm Caddy Shower Tote is Dormbuys. Taking from their LinkedIn page, Dormbuys is an online retailer for your dorm, apartment, and other living needs. Dormbuys’ profile image on Linkedin showcases a website called DormBuys.com, but currently, the website is down and not loading.

The Dormbuys Dorm Caddy Shower Tote is a no-frills nylon mesh bath tote that is, according to its product page on Amazon, manufactured to the highest quality available.

Though one may wonder why a mesh bath tote is a good option. Bath totes made of mesh provide consistent airflow because if no airflow is available, water will accumulate in it. Combine the accumulated water with enough heat and humidity and you may have a biome of nasty microorganism living in your bath tote. 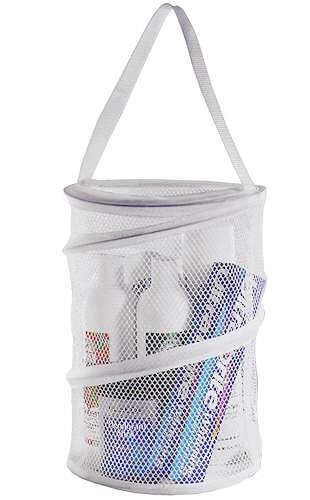 Aside from its mesh build, another noticeable aspect of the Dormbuys Dorm Shower Caddy Tote is its size. Measured around 8 inches by 12 inches, it’s one of the most compact bath totes you can buy where you can fit a ton of stuff. Usually, in the other reviewed shower totes in this website, bath totes are wider and bulkier especially if you place your shower essentials in it. With the Dormbuys Dorm Shower Caddy Tote, it’s different.

The strap is also a nice addition because aside from carrying the bath tote with it, you can also hang it on a ton of places while showering in a shared bathroom (the shower knob and other hooks in the bathroom).

The pros of the Dormbuys Dorm Shower Caddy Tote are in no way sponsored or paid by the manufacturer, Dormbuys, or Amazon. The pros below are a curation of verified opinions and reviews on Amazon.

Likewise, the cons of the Dormbuys Dorm Shower Caddy Tote are in no way sponsored or paid by the manufacturer, Dormbuys, or Amazon. Instead, the cons below are a curation of verified opinions and reviews on Amazon.

Weighing in the listed pros and cons, the Dormbuys Dorm Shower Caddy Tote is rated four out of five stars. Frankly, it’s a good shower caddy, but the fact that the top does not seal off shut may turn some buyers away from this otherwise perfect bath tote.

Buy the Dormbuys Dorm Shower Caddy Tote if you’re looking to carrying it by hand rather than mostly placing it inside a bag or any other compartment. One good example is, of course, if you’re living in a dormitory with shared bathrooms.