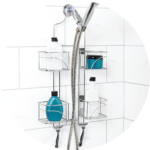 The first thing you’re probably going to notice is how bulky the Zenna Home 7446SS is. Actually, it’s designed to be that way since it’s intended to hold a handheld showerhead hose, if you have one, and to carry your large and heavy shower essentials like your big shampoo and conditioner bottles. The hanging shower caddy’s actual dimensions are 24.80 inches by 4.20 inches by 10.20 inches, which is a little bit larger than your usual over-the-showerhead shower caddies.

The main value proposition of the Zenna Home 7446SS is its four (4) large baskets that swing outward from the body independently. Through this function, the over-the-showerhead shower caddy’s baskets can fit large bottles and adjust to your storage needs. Subsequently, the second value proposition of the over-the-showerhead shower caddy resulting from the earlier advantage is that it helps free up the center so you can seamlessly fit your handheld showerhead’s hose through it. Moreover, there is a nifty large center hook to help organize your handheld showerhead’s hose when not in use.

Other functional qualities of the Zenna Home 7446SS also lists four (4) useful hooks to hang your razors, washcloths, poufs, and any other shower essentials with straps. Although these hooks are not unique to the over-the-showerhead shower caddy since almost all shower caddies have them, it’s still a good addition to improve the overall functionality and practicability of the hanging shower caddy that makes it the best buy for some.

Below are some of the pros for the Zenna Home 7446SS. Please note that the pros listed below are curations of verified Amazon reviews and not in any way paid for by Zenith Products Corporation.

On the other hand, below are the cons for the Zenna Home 7446SS. Likewise, the cons listed below are just curations of verified Amazon reviews and not in any way paid for by Zenith Products Corporation.

Taking all the pros and cons into account, the Zenna Home 7446SS is rated four out of five stars overall. It’s a perfect shower caddy for those with handheld showerheads, but the better option for those who have regular showerheads can be the simplehuman Adjustable which, as the name says, also has adjustable shelves.

View the latest price and possible discounts for the chrome Zenna Home 7446SS and its bronze-colored alternative, the Zenna Home E7446HB on Amazon. On the flip side, click here to view the simplehuman Adjustable – a better option for those who have fixed showerheads rather than portable ones.